Most everyone will wash their hands after going to the restroom or before eating. Why? Well, to prevent germs from entering our bodies. While those actions are considered basic human hygiene, they are also the simplest example of a biosecurity measure.

Biosecurity is something we have become more aware of due to the COVID-19 pandemic. Disease outbreaks resulting from Avian influenza, Porcine Epidemic Diarrhea virus, and African Swine Fever virus within the animal production industry have demonstrated the critical importance of on-farm biosecurity. Disease and infection occur when an infectious agent connects with a receptive host and in an environment that facilitates introduction and infection. Biosecurity is the effort one puts into thwarting pathogen and disease introduction and progression. 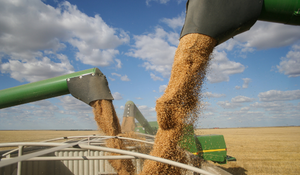 Effective on-farm biosecurity creates a barrier between the farm and the outside world. Every day numerous fomites move in and out of farms, carrying pathogens invisible to the naked eye. Fomites can range from insects to feed trucks, so how do producers decide which on-farm biosecurity measures are practical? They start with a risk assessment. Risk assessments are used to determine the likelihood of a pathogen entering the farm, spreading within the farm and leaving the farm. They require an understanding of farm operations, pathogens and fomite behavior.

An effective on-farm biosecurity plan identifies fomites, addresses transmission enablers, understands pathogen and livestock behavior and uses knowledge to implement measures that interrupt pathogen in, out and among farms. For example, it is well understood and accepted that feed is a fomite for Salmonella. Different levels of Salmonella prevalence have been attributed to various feed ingredients. A risk assessment for Salmonella in feed accounts for the likelihood of feed contamination, feed delivery and consumption frequency, farm locations where feed touches equipment, the ability of Salmonella to colonize and be shed within the farm and the odds that Salmonella will leave the farm.

2. Make a Plan for On-Farm Biosecurity

Making a plan for on-farm biosecurity requires the same mentality one would have when trying to achieve a goal. Time is spent to identify and evaluate risks to biosecurity, and during this process, information is collected on the pathogens of concern and facility and operational vulnerabilities. Creating a practical and effective on-farm biosecurity plan requires producers to use the information to: 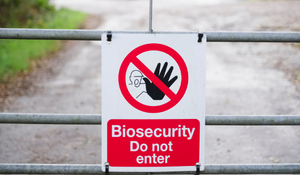 Successful protection of farms against biosecurity threats requires that everyone understands and implements on-farm biosecurity measures. Measures should be comprehensive, holistic and do-able. Unfortunately, tackling everything is not always possible. Therefore, it is essential for producers to ask:

What measures can farms implement to significantly impact on-farm biosecurity?

Let’s examine the Salmonella in feed example again. Feed has been identified as a Salmonella risk. Feed

is supplied and delivered daily and reaches every animal on the farm, touching every feeder and barn. Salmonella is zoonotic, well adapted to gastrointestinal tracts, and horizontal transmission from animal to animal as well as animal to human or vice versa is likely to occur. Measures that can be taken to mitigate Salmonella in feed include physical barriers that protect feed from pests during transport and storage, chemical treatment of feed or feed ingredients, and decontamination of feeders, bins, and trucks.

Pathogens, such as Salmonella, have numerous fomites. It may not be possible for producers to address every single risk, so it is so essential for them to implement measures that have the most significant impact. Implementing measures where producers have the most control can enhance on-farm biosecurity. Common strategies that prove as effective control in preventing pathogen entry onto farms are:

Significant impact is a quality that every on-farm biosecurity measure implemented must possess. After all, there is a cost associated with protecting livestock from pathogens. Although biosecurity is a holistic program, there is no point in paying to perform six small actions when one action that addresses multiple vulnerabilities can be implemented. 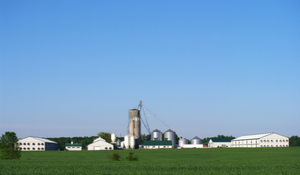 Back to our example. Feed delivered to the farm could be unknowingly contaminated with Salmonella. The feed was delivered via a truck, stored on the farm, delivered to feeders in multiple barns and consumed by livestock. What began as a Salmonella in feed problem has become a farm-wide Salmonella problem. Salmonella is on the truck, in the bin, feeders and gastrointestinal tracts, which means Salmonella is now actively spreading throughout the flock or herd. Looking back, where did the producer have the most control?

If the feed in the truck was clean, would the outcome have been the same?

True feed sanitation must protect feed from treatment until consumption. Feed sanitizers reduce the microbial load of feed and keep feed pathogen-free by offering continued protection against recontamination. Feed is central to animal production and an essential part of on-farm biosecurity. While feed sanitation is a crucial part of a Salmonella control program, it has also been linked to other pathogens such as Clostridia, Campylobacter, AI, PEDV and ASFV, making it significantly impactful to on-farm biosecurity.

Learn more about how can be an integral part of any on-farm biosecurity program.