horse, often overlooked as innocuous, yet capable of introducing disease-causing pathogens through its own contamination.   Well, it stopped being overlooked last Friday, when feed became the focus of discussion live-on-air when Mike Adams of Adams on Agriculture met Dr. Enrique Montiel.

Feed Can Introduce Pathogens to Livestock

As a national agricultural talk radio show, Adams on Agriculture discusses agricultural issues ranging from policy and new technology to weather impacting the growing season. Dr. Montiel joined Friday’s show, which also featured CEOs from the National Biodiesel Board and National Potato Council as well as the Secretary of Agriculture from the Biden Administration, to explain how clean feed is essential to keeping livestock free from disease.

“Producers spend large amounts of money on biosecurity to protect livestock from disease, but the true threat from feed is all too often overlooked.” Dr. Montiel explained. “While pathogens can enter live production through different – often highly localized - vectors, feed is different, it can be easily spread from a single contaminated source through an entire operation.” 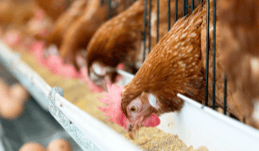 Biosecurity programs are commonly strong on traffic control, cleaning, disinfection, and rodent control. However, according to Dr. Montiel, the feed risk is not being addressed, with protocols commonly limited to simply covering feed stores. However, the independent body of evidence that feed is a significant fomite for productivity-limiting and human food safety pathogens is growing fast. Catastrophic disease agents such as African Swine Fever Virus and Avian influenza can survive in feed over time. Dr. Scott Dee’s transboundary model work at Pipestone Veterinary Services has shown that feed ingredients, such as soybean meal, can sustain viral pathogens and serve as a global transmission risk. Research from Kansas State University published by Dr. Niederwerder shows that feed can transmit ASFV and infect pigs. As mentioned in a publication from the 35th volume of Clinical Infections Diseases, several studies have identified that Salmonella serovars found in feed can infect livestock and have been linked to outbreaks. Recent work by Dr. Shariat at PDRC has isolated types of Salmonella capable of causing human foodborne illness in feed.

As a partner to the world’s food producers, developing innovative programs to produce safer food efficiently, Anitox continually strives to understand the disease and pathogen risk facing the industry. Feed makes up 60-70% of live production investment; for ROI, livestock must achieve their full genetic potential. Feed that is high in nutrition and low in pathogen levels is vital, as maintaining a healthy gut allows for better nutrient absorption and better performance. Our solutions do just that, ensuring feed is free from harmful pathogens and microbial variation. Termin-8, for example, has been shown to reduce S. typhimurium found in feed, and it protects against recontamination for up to 21 days, a claim that the FDA approves. This means that feed is protected from recontamination post-application, throughout transport, and during storage on the farm.

If you’re ready to take effective action against feed-source pathogens, or just need further information at this stage, contact us. We’re here to help.