According to a USDA report, today’s turkeys are nearly 13 pounds bigger than they were in 1960. This is primarily due to genetic selection and artificial insemination, which has resulted in poults with higher growth potential. The time and money spent to produce birds that can grow bigger and faster places increased importance on low feed conversion rates and improved average daily gains. Clean nutritious feed caters to both performance measurements and helps birds achieve their full genetic potential.

Turkey performance, observed through feed conversion rates and body weight gain, is highly dependent on gut health and the absorption of nutrients from feed. Considering the primary role of the gastrointestinal system is to break down and absorb nutrients for growth, it is critical to ensure that gut health is supported. For more information access our guide below.

How Does Gut Health Impact Performance?

An article by Dr. Richard Bailey of Aviagen, says a bird’s gastrointestinal tract can be colonized with six to eight hundred different species of bacteria. These bacteria are commonly referred to as gut flora. Gut flora begins development post-hatch and is influenced mainly by:

Bacteria inhabiting the gut uses competitive exclusion to prevent bacterial pathogens from overtaking the gastrointestinal tract. Essentially, each part of the gut is home to a population of bacteria that work synergistically with the host to aid digestion, initiate the gut’s immune response and sometimes create a protective barrier that prevents pathogens from reaching attachment sites.

Yes. Maintaining a healthy gut is a delicate balance for all living things, but even more so for turkey producers. Production factors impacting gut health include but are not limited to:

While all these factors play a role, feed is central to turkey production. 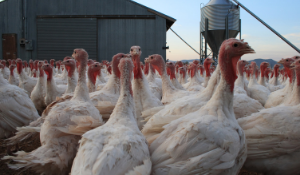 Fun fact, according to the National Turkey Federation, an average of 75 to 80 pounds of feed is required to raise a Tom to market weight. Market weight is approximately 38 pounds, which means in a matter of 18 weeks, one turkey eats nearly twice its grown body weight! After feeding an entire flock, it’s not hard to acknowledge that feed is by far one of the most significant production investments.

Feed as a Fomite for Pathogens

Feed as a fomite introduces microbial contaminants into turkey production. Bacteria, mold and yeasts have all been found to reduce feed quality through decreasing nutrient value. However, keeping feed clean and turkey performance high goes beyond keeping feeders clean and topped off – from production to the point-of-consumption feed is vulnerable to contamination. Therefore, producers should consider feed pathogen control solutions to help strengthen biosecurity and improve animal performance by ensuring that their feed investment is protected.

Feed production begins with the selection of raw materials. Anitox’s global database has reported raw materials such as corn, soybean meal and wheat to be, respectively, 21%, 30% and 5% contaminated with Salmonella, 24%, 29% and 55% with Clostridia.

As can be seen in the table below, numerous sources have tracked Salmonella in US feed mills. Contamination decreases in the pellet mill but can recover during the cooling process, potentially contaminating the mill all the way to load out. Additionally, some Salmonella serovars have adapted to survive in the feed and feed mill environment.

Not every load of feed will bear the same level of contamination, and some may be cleaner than others. However, every feed load is subject to recontamination of feed pathogens such as Salmonella, Clostridia, E. coli and even Avian Influenza.

Feed sanitizers deliver a high level of feed pathogen control at low inclusion levels and provide recontamination protection. This not only protects your turkey feed investment but results in:

To learn more about how Anitox supports turkey performance through feed sanitation, check out our Guide to Pathogen Control in Turkeys, or if you are ready to strengthen your feed pathogen control efforts, speak to an expert today.