Prevent Enteritis. Get Your Guide Today.

In the last two decades, the average laying hen has gone from laying 264 eggs per year to 296 eggs per year, which is great because the average per capita consumption of eggs has increased by 15%. However, to meet consumption needs and efficiently produce eggs, commercial layers require a nutritious, safe and efficient energy source. In fact, according to the United Egg Producers a single hen consumes nearly 78 pounds of feed in a lifetime. So how hard would it be to keep a flock of commercial layers productive and healthy if all 78 pounds of feed were contaminated with feed-source pathogens such as Salmonella, Clostridia and E. coli?

Unfortunately, many commercial egg producers already know the consequences of high pathogen prevalence within live production, but how much can be attributed to feed?

What Are the Biggest Challenges for Layer Production and Management?

Different feed-source pathogens present different problems within commercial egg production. For example, Clostridia is known to cause enteritis. A single enteritis event can cost production the loss of 6 eggs per hen in a two-million-layer flock that can equal a 1.3 million dollar loss. On the other hand, pathogens such as Salmonella, responsible for 1 in 4 diarrheal diseases globally, present a food safety issue. Beyond the food safety challenges, most commercial egg producers face these four significant challenges during the egg production cycle.

How Does Feed Impact Layer Production and Management?

Feed, a fomite capable of sustaining high and variable microbial loads, is the largest and most centralized input to layer production and management. Microbial contaminants such as Salmonella and Clostridia enter commercial egg production via feed. Having been linked to an 84% incidence in mixed feed samples, Clostridia is prevalent in feed, and its ingredients. Likewise, Salmonella has been repeatedly linked to feed. CRISPR studies have found that 6% of feed samples collected from more than 130 mills were Salmonella-positive and observed that feed can host diverse populations of Salmonella.

Reducing pathogen prevalence within layer and production management is crucial to flock productivity. Feed-source, pathogens such as Salmonella and Clostridia have been associated with increased incidence of performance-limiting diseases such as bacterial enteritis, leading to higher mortality, poor flock uniformity, persistency and even eggshell quality. In addition, Salmonella, specifically S. enteritidis, presents a food safety challenge that can impact brand reputation and have a negative impact on overall profitability. 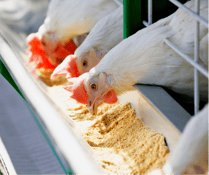 Feed-source pathogens can be mitigated by effectively reducing the microbial loads observed in feed and feed ingredients. Truly effective feed pathogen control strategies reduce Salmonella within layer production and management systems and support performance and productivity. Efficient and profitable egg production requires the efficient conversion of feed to energy. When microbial contaminants are present in feed, they are introduced directly to the gastrointestinal tracts of layers, causing disruption that impacts the GIT’s ability to convert feed to energy and reduces the amount and quality of eggs produced.

Prevent Enteritis. Get Your Guide Today.